@theuso tour veteran @thebandperry gave our troops a quick shout out before performing at the Patriot Festival in Virginia Beach last night!

VIRGINIA BEACH, Va.—The Band Perry had already played for troops once under the USO logo, putting on a show at RAF Lakenheath in England back in March. Friday night, the trio rocked the stage for thousands – including troops and their families – at the USO Virginia Beach Patriotic Festival. Take a look.

The USO/Ride 2 Recovery Memorial Day Challenge wrapped up Friday afternoon in Virginia Beach, Va. The USO’s Sandi Moynihan was there to chronicle the event. Congratulations to all the wounded, ill and injured troops who made the five-day trek from Washington, D.C.

Pulled from the USO archives, here’s legendary comedian Robin Williams’ 2008 take on what it’s like to go on a USO tour.

There’s only one week left to help the USO break the Guinness World Record for most signatures on a flag.

Sign your name to the Every Moment Counts flag today at USOmoments.org and show your support of our troops and their families! 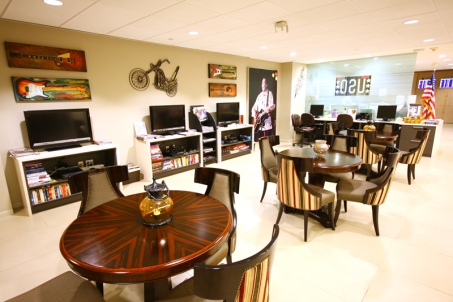 An inside view of the USO at Las Vegas McCarran International Airport.

ST. PETERSBURG, Fla.–A host of USO centers took home honors this week – including top overall center USO Las Vegas McCarran International Airport – at Wednesday’s Second Annual Tell USO Awards. The awards are broken down by region and based solely on survey responses given by the troops and families who used the USO’s 160-plus locations around the world in 2013.

CHARLOTTE, N.C.–NASCAR drivers are the latest celebrities to sign The USO’s Every Moment Counts Flag. The USO is in Charlotte this weekend with Presidents Circle partner Coca-Cola for Sunday’s Coke 600. Press play to see what happened when drivers like Dale Earnhardt Jr., Casey Mears, David Ragan, Josh Wise and others autographed the flag. And don’t forget to thank America’s troops and help the USO break a Guinness World Record by adding your name.